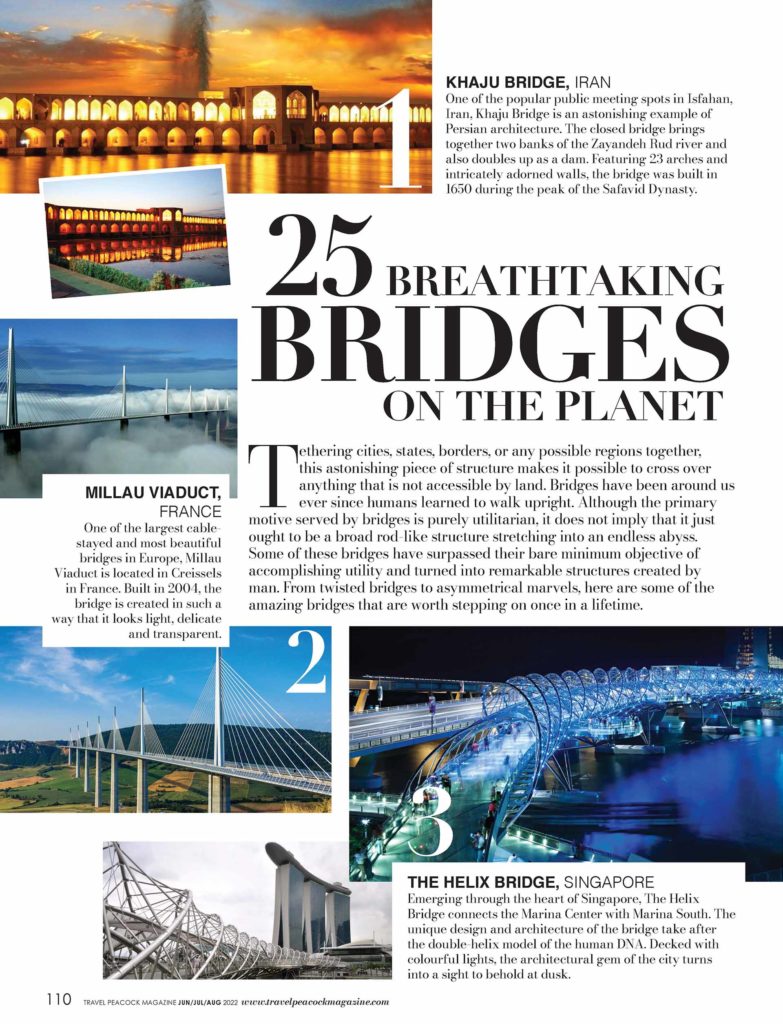 Tethering cities, states, borders, or any possible regions together, this astonishing piece of structure makes it possible to cross over anything that is not accessible by land. Bridges have been around us ever since humans learned to walk upright. Although the primary motive served by bridges is purely utilitarian, it does not imply that it just ought to be a broad rod-like structure stretching into an endless abyss. Some of these bridges have surpassed their bare minimum objective of accomplishing utility and turned into remarkable structures created by man. From twisted bridges to asymmetrical marvels, here are some of the amazing bridges that are worth stepping on once in a lifetime.

01. KHAJU BRIDGE, IRAN
One of the popular public meeting spots in Isfahan, Iran, Khaju Bridge is an astonishing example of Persian architecture. The closed bridge brings together two banks of the Zayandeh Rud river and also doubles up as a dam. Featuring 23 arches and intricately adorned walls, the bridge was built in 1650 during the peak of the Safavid Dynasty.

02. MILLAU VIADUCT, FRANCE
One of the largest cable-stayed and most beautiful bridges in Europe, Millau Viaduct is located in Creissels in France. Built in 2004, the bridge is created in such a way that it looks light, delicate and transparent.

03. THE HELIX BRIDGE, SINGAPORE
Emerging through the heart of Singapore, The Helix Bridge connects the Marina Center with Marina South. The unique design and architecture of the bridge take after the double-helix model of the human DNA. Decked with colourful lights, the architectural gem of the city turns into a sight to behold at dusk. 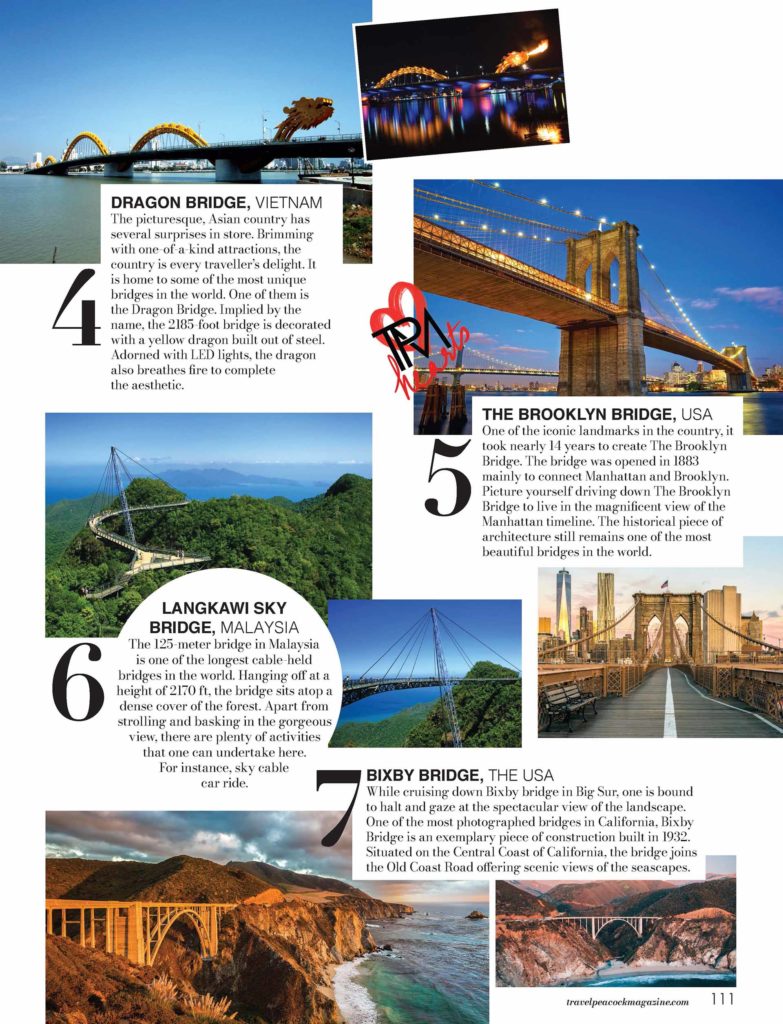 04. DRAGON BRIDGE, VIETNAM
The picturesque, Asian country has several surprises in store. Brimming with one-of-a-kind attractions, the country is every traveller’s delight. It is home to some of the most unique bridges in the world. One of them is the Dragon Bridge. Implied by the name, the 2185-foot bridge is decorated with a yellow dragon built out of steel. Adorned with LED lights, the dragon also breathes fire to complete the aesthetic.

06. LANGKAWI SKY BRIDGE, MALAYSIA
The 125-meter bridge in Malaysia is one of the longest cable-held bridges in the world. Hanging off at a height of 2170 ft, the bridge sits atop a dense cover of the forest. Apart from strolling and basking in the gorgeous view, there are plenty of activities that one can undertake here. For instance, sky cable car ride.

07. BIXBY BRIDGE, THE USA
While cruising down Bixby bridge in Big Sur, one is bound to halt and gaze at the spectacular view of the landscape. One of the most photographed bridges in California, Bixby Bridge is an exemplary piece of construction built in 1932. Situated on the Central Coast of California, the bridge joins the Old Coast Road offering scenic views of the seascapes. 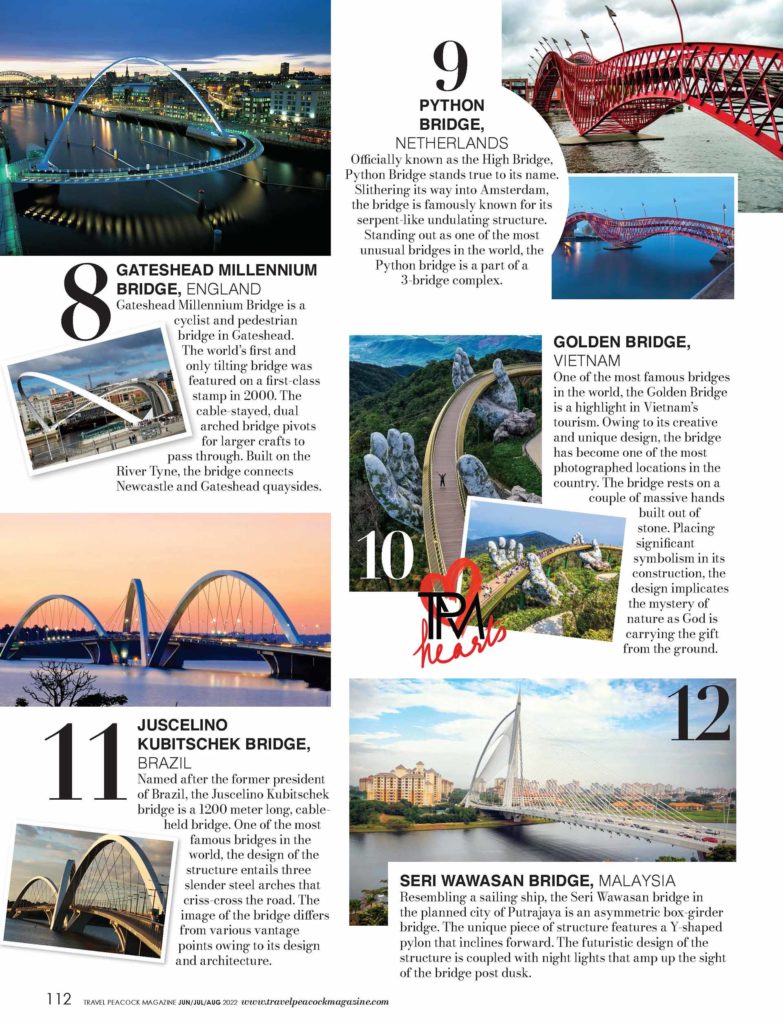 08. GATESHEAD MILLENNIUM BRIDGE, ENGLAND
Gateshead Millennium Bridge is a cyclist and pedestrian bridge in Gateshead. The world’s first and only tilting bridge was featured on a first-class stamp in 2000. The cable-stayed, dual arched bridge pivots for larger crafts to pass through. Built on the River Tyne, the bridge connects Newcastle and Gateshead quaysides.

09. PYTHON BRIDGE, NETHERLANDS
Officially known as the High Bridge, Python Bridge stands true to its name. Slithering its way into Amsterdam, the bridge is famously known for its serpent-like undulating structure. Standing out as one of the most unusual bridges in the world, the Python bridge is a part of a 3-bridge complex.

10. GOLDEN BRIDGE, VIETNAM
One of the most famous bridges in the world, the Golden Bridge is a highlight in Vietnam’s tourism. Owing to its creative and unique design, the bridge has become one of the most photographed locations in the country. The bridge rests on a couple of massive hands built out of stone. Placing significant symbolism in its construction, the design implicates the mystery of nature as God is carrying the gift from the ground.

11. JUSCELINO KUBITSCHEK BRIDGE, BRAZIL
Named after the former president of Brazil, the Juscelino Kubitschek bridge is a 1200 meter long, cable-held bridge. One of the most famous bridges in the world, the design of the structure entails three slender steel arches that criss-cross the road. The image of the bridge differs from various vantage points owing to its design and architecture.

12. SERI WAWASAN BRIDGE, MALAYSIA
Resembling a sailing ship, the Seri Wawasan bridge in the planned city of Putrajaya is an asymmetric box-girder bridge. The unique piece of structure features a Y-shaped pylon that inclines forward. The futuristic design of the structure is coupled with night lights that amp up the sight of the bridge post dusk. 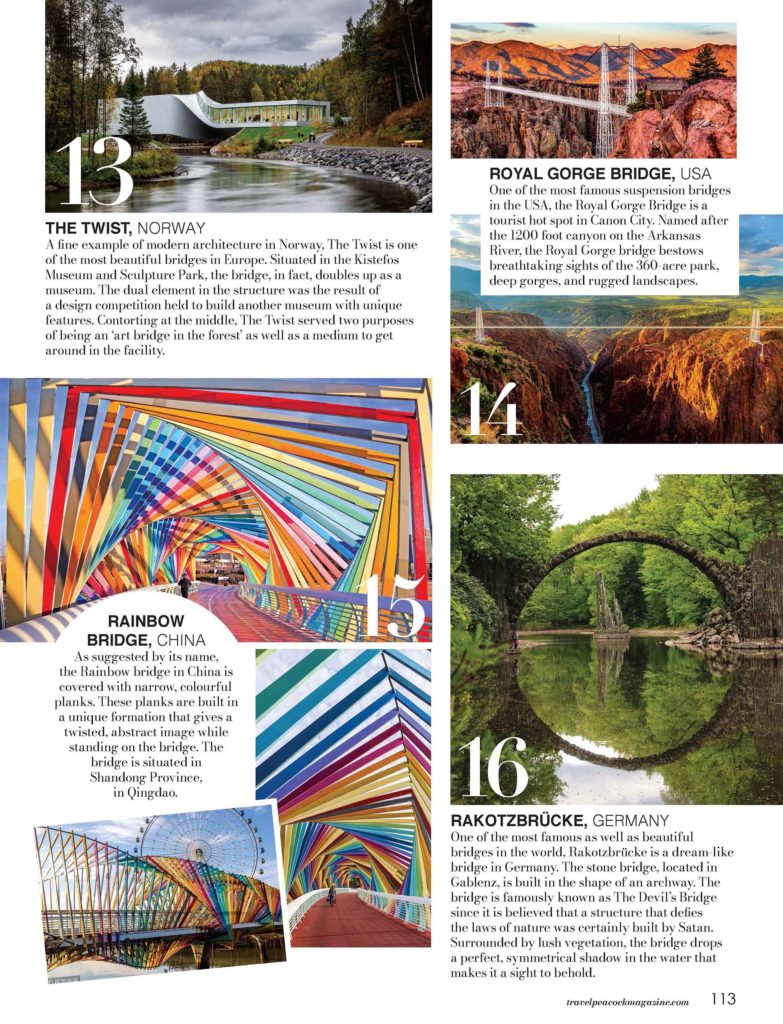 13. THE TWIST, NORWAY
A fine example of modern architecture in Norway, The Twist is one of the most beautiful bridges in Europe. Situated in the Kistefos Museum and Sculpture Park, the bridge, in fact, doubles up as a museum. The dual element in the structure was the result of a design competition held to build another museum with unique features. Contorting at the middle, The Twist served two purposes of being an ‘art bridge in the forest’ as well as a medium to get around in the facility.

14. ROYAL GORGE BRIDGE, USA
One of the most famous suspension bridges in the USA, the Royal Gorge Bridge is a tourist hot spot in Canon City. Named after the 1200 foot canyon on the Arkansas River, the Royal Gorge bridge bestows breathtaking sights of the 360-acre park, deep gorges, and rugged landscapes.

15. RAINBOW BRIDGE, CHINA
As suggested by its name, the Rainbow bridge in China is covered with narrow, colourful planks. These planks are built in a unique formation that gives a twisted, abstract image while standing on the bridge. The bridge is situated in Shandong Province, in Qingdao.

16. RAKOTZBRÜCKE, GERMANY
One of the most famous as well as beautiful bridges in the world, Rakotzbrücke is a dream-like bridge in Germany. The stone bridge, located in Gablenz, is built in the shape of an archway. The bridge is famously known as The Devil’s Bridge since it is believed that a structure that defies the laws of nature was certainly built by Satan. Surrounded by lush vegetation, the bridge drops a perfect, symmetrical shadow in the water that makes it a sight to behold. 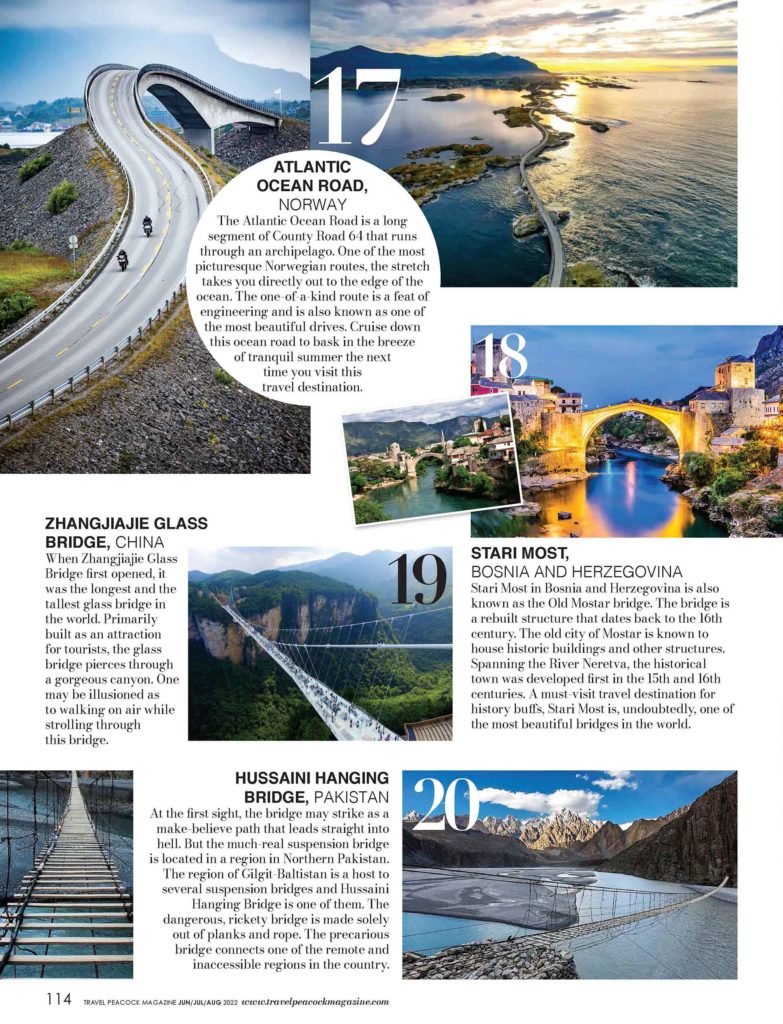 17. ATLANTIC OCEAN ROAD, NORWAY
The Atlantic Ocean Road is a long segment of County Road 64 that runs through an archipelago. One of the most picturesque Norwegian routes, the stretch takes you directly out to the edge of the ocean. The one-of-a-kind route is a feat of engineering and is also known as one of the most beautiful drives. Cruise down this ocean road to bask in the breeze of tranquil summer the next time you visit this travel destination.

18. STARI MOST, BOSNIA AND HERZEGOVINA
Stari Most in Bosnia and Herzegovina is also known as the Old Mostar bridge. The bridge is a rebuilt structure that dates back to the 16th century. The old city of Mostar is known to house historic buildings and other structures. Spanning the River Neretva, the historical town was developed first in the 15th and 16th centuries. A must-visit travel destination for history buffs, Stari Most is, undoubtedly, one of the most beautiful bridges in the world.

19. ZHANGJIAJIE GLASS BRIDGE, CHINA
When Zhangjiajie Glass Bridge first opened, it was the longest and the tallest glass bridge in the world. Primarily built as an attraction for tourists, the glass bridge pierces through a gorgeous canyon. One may be illusioned as to walking on air while strolling through this bridge.

20. HUSSAINI HANGING BRIDGE, PAKISTAN
At the first sight, the bridge may strike as a make-believe path that leads straight into hell. But the much-real suspension bridge is located in a region in Northern Pakistan. The region of Gilgit-Baltistan is a host to several suspension bridges and Hussaini Hanging Bridge is one of them. The dangerous, rickety bridge is made solely out of planks and rope. The precarious bridge connects one of the remote and inaccessible regions in the country. 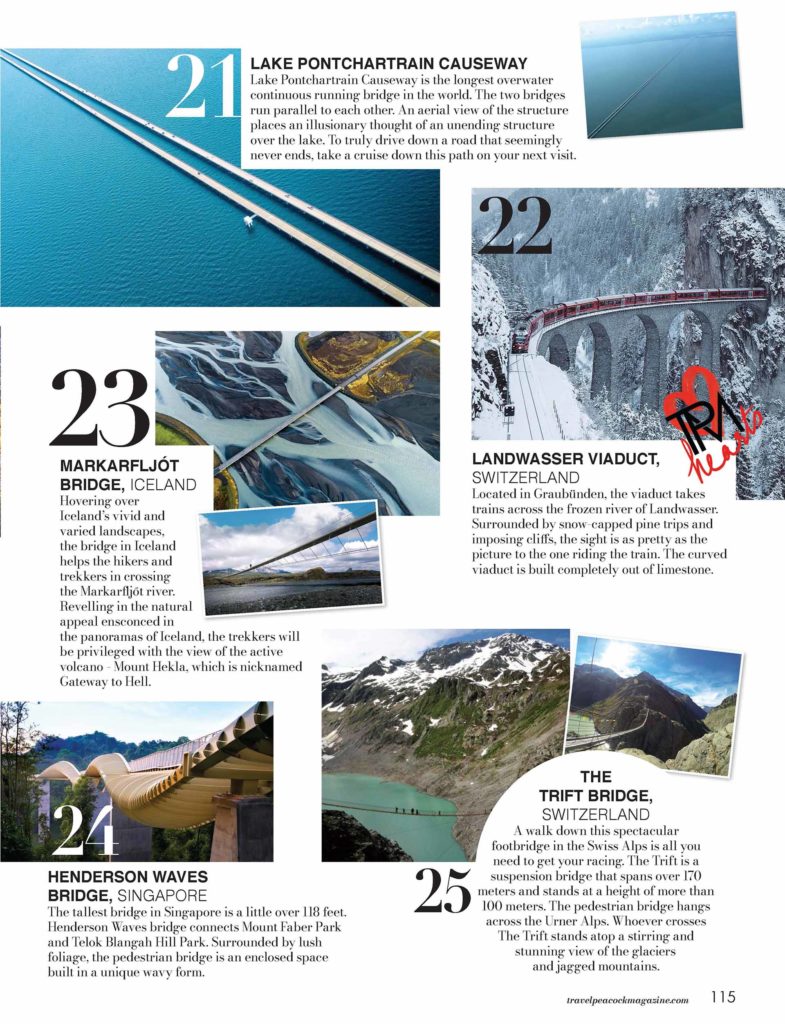 21. LAKE PONTCHARTRAIN CAUSEWAY
Lake Pontchartrain Causeway is the longest overwater continuous running bridge in the world. The two bridges run parallel to each other. An aerial view of the structure places an illusionary thought of an unending structure over the lake. To truly drive down a road that seemingly never ends, take a cruise down this path on your next visit.

22. LANDWASSER VIADUCT, SWITZERLAND
Located in Graubünden, the viaduct takes trains across the frozen river of Landwasser. Surrounded by snow-capped pine trips and imposing cliffs, the sight is as pretty as the picture to the one riding the train. The curved viaduct is built completely out of limestone.

23. MARKARFLJÓT BRIDGE, ICELAND
Hovering over Iceland’s vivid and varied landscapes, the bridge in Iceland helps the hikers and trekkers in crossing the Markarfljót river. Revelling in the natural appeal ensconced in the panoramas of Iceland, the trekkers will be privileged with the view of the active volcano – Mount Hekla, which is nicknamed Gateway to Hell.

24. THE BROOKLYN BRIDGE, USA
One of the iconic landmarks in the country, it took nearly 14 years to create The Brooklyn Bridge. The bridge was opened in 1883 mainly to connect Manhattan and Brooklyn. Picture yourself driving down The Brooklyn Bridge to live in the magnificent view of the Manhattan timeline. The historical piece of architecture still remains one of the most beautiful bridges in the world.

25. THE TRIFT BRIDGE, SWITZERLAND
A walk down this spectacular footbridge in the Swiss Alps is all you need to get your racing. The Trift is a suspension bridge that spans over 170 meters and stands at a height of more than 100 meters. The pedestrian bridge hangs across the Urner Alps. Whoever crosses The Trift stands atop a stirring and stunning view of the glaciers and jagged mountains.