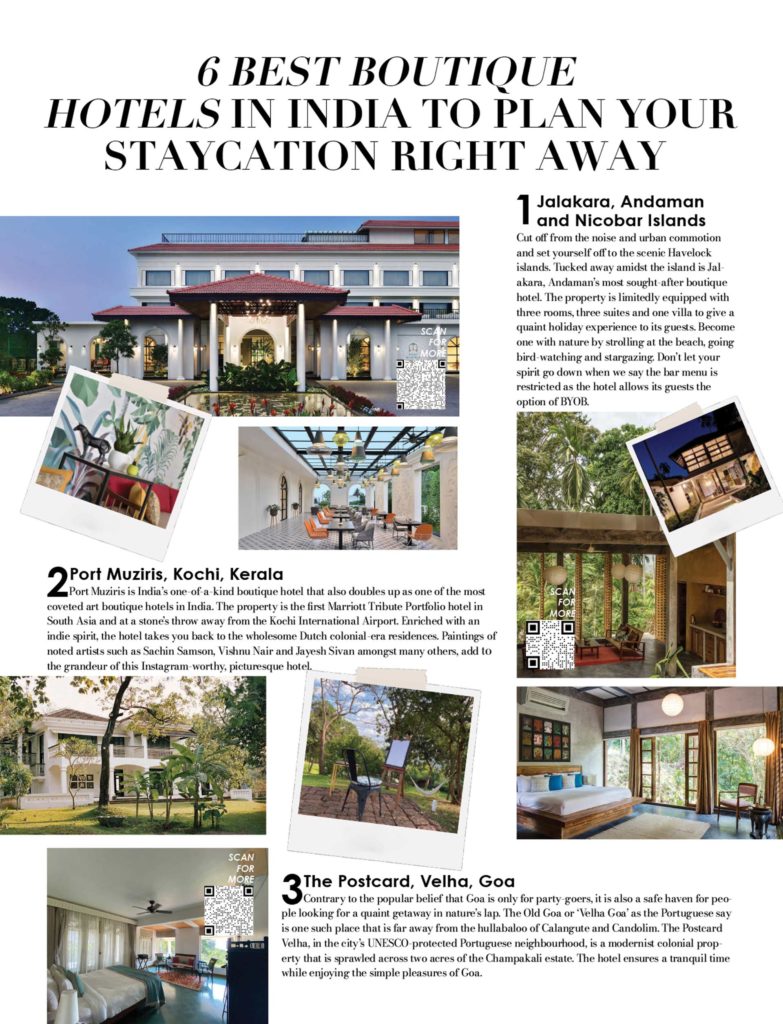 [1] Jalakara, the Andaman and Nicobar Islands
Cut off from the noise and urban commotion and set yourself off to the scenic Havelock islands. Tucked away amidst the island is Jalakara, Andaman’s most sought-after boutique hotel. The property is limitedly equipped with three rooms, three suites and one villa to give a quaint holiday experience to its guests. Become one with nature by strolling at the beach, going bird-watching and stargazing. Don’t let your spirit go down when we say the bar menu is restricted as the hotel allows its guests the option of BYOB.

[2] The Postcard, Velha, Goa
Contrary to the popular belief that Goa is only for party-goers, it is also a safe haven for people looking for a quaint getaway in nature’s lap. The Old Goa or ‘Velha Goa’ as the Portuguese say is one such place that is far away from the hullabaloo of Calangute and Candolim. The Postcard Velha, in the city’s UNESCO-protected Portuguese neighbourhood, is a modernist colonial property that is sprawled across two acres of the Champakali estate. The hotel ensures a tranquil time while enjoying the simple pleasures of Goa.

[3] Port Muziris, Kochi, Kerala
Port Muziris is India’s one-of-a-kind boutique hotel that also doubles up as one of the most coveted art boutique hotels in India. The property is the first Marriott Tribute Portfolio hotel in South Asia and at a stone’s throw away from the Kochi International Airport. Enriched with an indie spirit, the hotel takes you back to the wholesome Dutch colonial-era residences. Paintings of noted artists such as Sachin Samson, Vishnu Nair and Jayesh Sivan amongst many others, add to the grandeur of this Instagram-worthy, picturesque hotel. 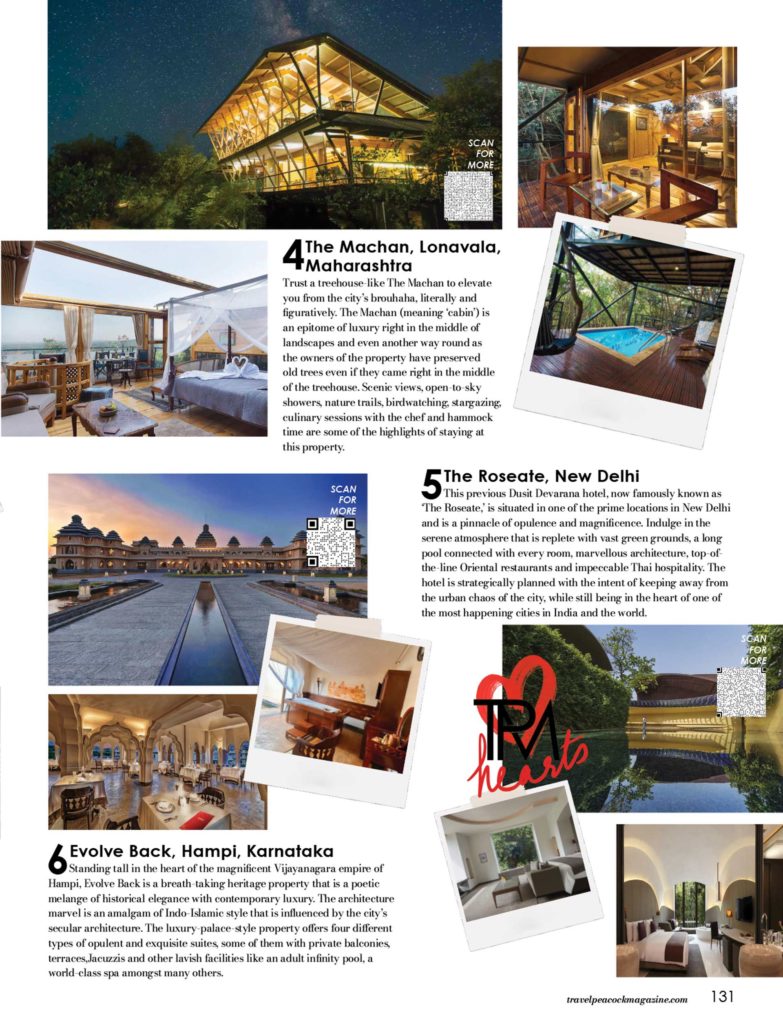 [4] The Machan, Lonavala, Maharashtra
Trust a treehouse-like The Machan to elevate you from the city’s brouhaha, literally and figuratively. The Machan (meaning ‘cabin’) is an epitome of luxury right in the middle of landscapes and even another way round as the owners of the property have preserved old trees even if they came right in the middle of the treehouse. Scenic views, open-to-sky showers, nature trails, birdwatching, stargazing, culinary sessions with the chef and hammock time are some of the highlights of staying at this property.

[5] The Roseate, New Delhi
This previous Dusit Devarana hotel, now famously known as ‘The Roseate,’ is situated in one of the prime locations in New Delhi and is a pinnacle of opulence and magnificence. Indulge in the serene atmosphere that is replete with vast green grounds, a long pool connected with every room, marvellous architecture, top-of-the-line Oriental restaurants and impeccable Thai hospitality. The hotel is strategically planned with the intent of keeping away from the urban chaos of the city, while still being in the heart of one of the most happening cities in India and the world.

[6] Evolve Back, Hampi, Karnataka
Standing tall in the heart of the magnificent Vijayanagara empire of Hampi, Evolve Back is a breath-taking heritage property that is a poetic melange of historical elegance with contemporary luxury. The architecture marvel is an amalgam of Indo-Islamic style that is influenced by the city’s secular architecture. The luxury-palace-style property offers four different types of opulent and exquisite suites, some of them with private balconies, terraces,Jacuzzis and other lavish facilities like an adult infinity pool, a world-class spa amongst many others.