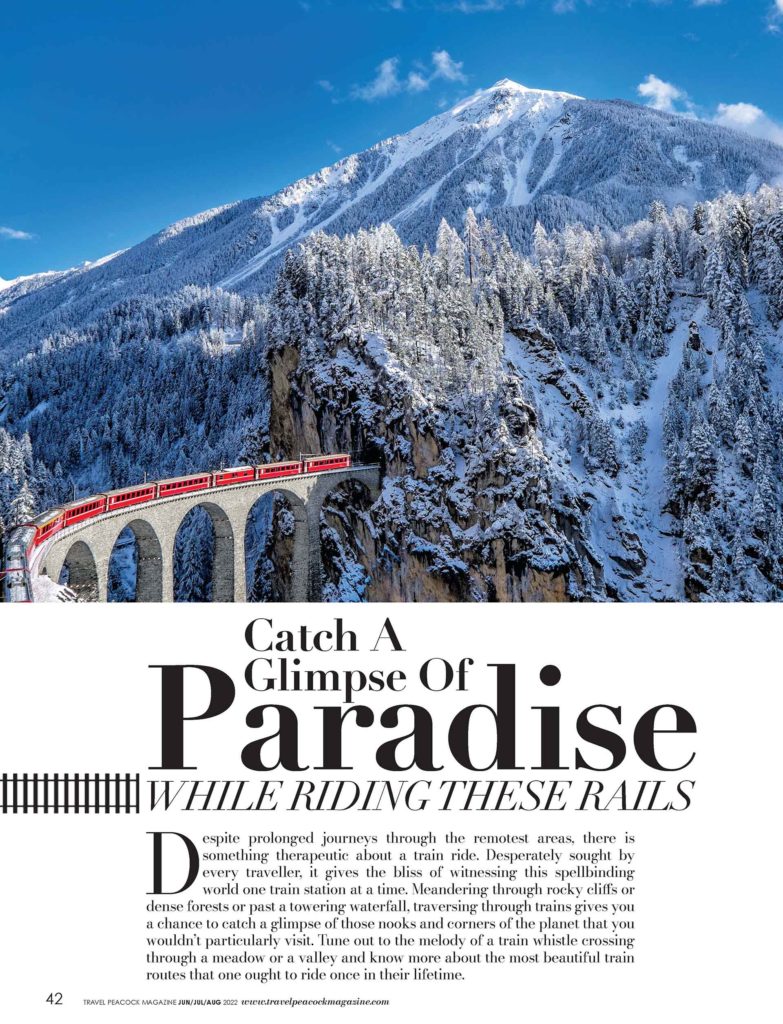 Despite prolonged journeys through the remotest areas, there is something therapeutic about a train ride. Desperately sought by every traveller, it gives the bliss of witnessing this spellbinding world one train station at a time. Meandering through rocky cliffs or dense forests or past a towering waterfall, traversing through trains gives you a chance to catch a glimpse of those nooks and corners of the planet that you wouldn’t particularly visit. Tune out to the melody of a train whistle crossing through a meadow or a valley and know more about the most beautiful train routes that one ought to ride once in their lifetime. 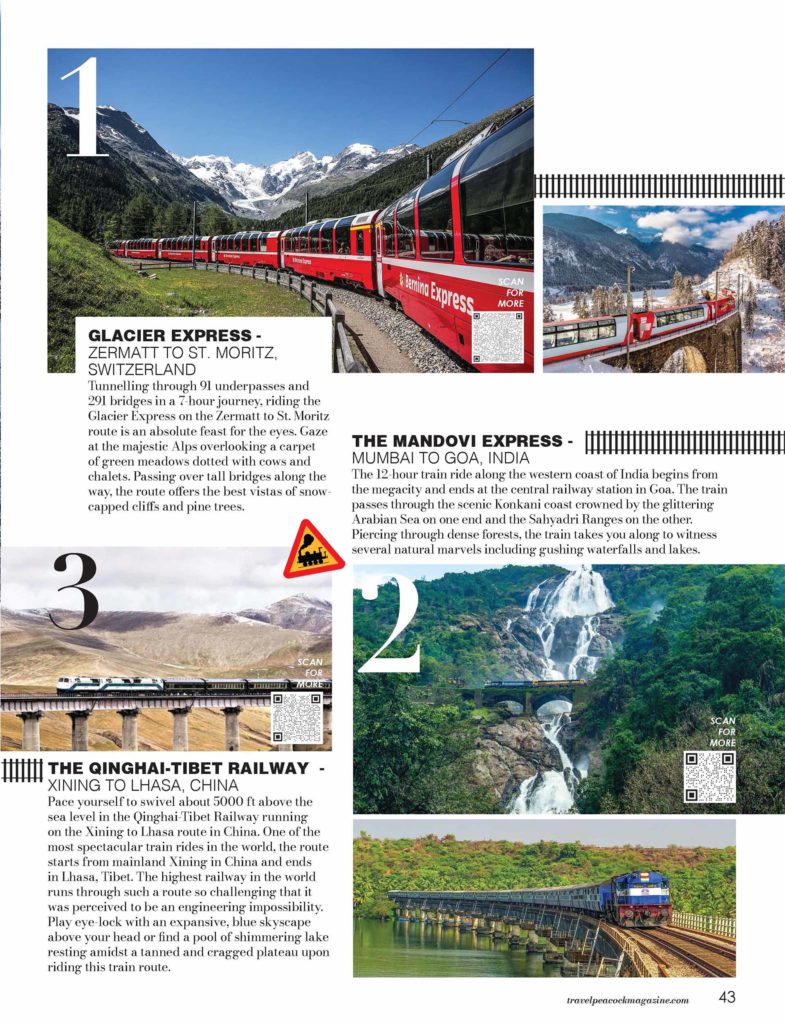 Glacier Express – Zermatt to St. Moritz, Switzerland
Tunnelling through 91 underpasses and 291 bridges in a 7-hour journey, riding the Glacier Express on the Zermatt to St. Moritz route is an absolute feast for the eyes. Gaze at the majestic Alps overlooking a carpet of green meadows dotted with cows and chalets. Passing over tall bridges along the way, the route offers the best vistas of snow-capped cliffs and pine trees.

The Mandovi Express – Mumbai to Goa, India
The 12-hour train ride along the western coast of India begins from the megacity and ends at the central railway station in Goa. The train passes through the scenic Konkani coast crowned by the glittering Arabian Sea on one end and the Sahyadri Ranges on the other. Piercing through dense forests, the train takes you along to witness several natural marvels including gushing waterfalls and lakes.

The Qinghai-Tibet Railway – Xining to Lhasa, China
Pace yourself to swivel about 5000 ft above the sea level in the Qinghai-Tibet Railway running on the Xining to Lhasa route in China. One of the most spectacular train rides in the world, the route starts from mainland Xining in China and ends in Lhasa, Tibet. The highest railway in the world runs through such a route so challenging that it was perceived to be an engineering impossibility. Play eye-lock with an expansive, blue skyscape above your head or find a pool of shimmering lake resting amidst a tanned and cragged plateau upon riding this train route. 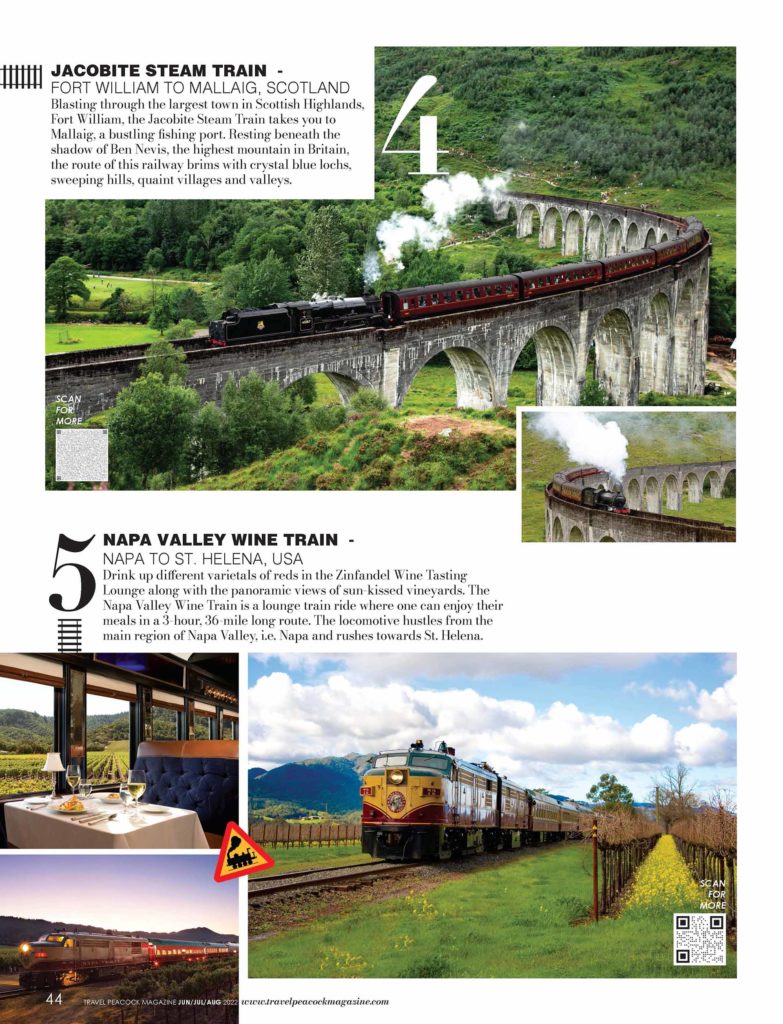 Jacobite Steam Train – Fort William to Mallaig, Scotland
Blasting through the largest town in Scottish Highlands, Fort William, the Jacobite Steam Train takes you to Mallaig, a bustling fishing port. Resting beneath the shadow of Ben Nevis, the highest mountain in Britain, the route of this railway brims with crystal blue lochs, sweeping hills, quaint villages and valleys.

Napa Valley Wine Train – Napa to St. Helena, USA
Drink up different varietals of reds in the Zinfandel Wine Tasting Lounge along with the panoramic views of sun-kissed vineyards. The Napa Valley Wine Train is a lounge train ride where one can enjoy their meals in a 3-hour, 36-mile long route. The locomotive hustles from the main region of Napa Valley, i.e. Napa and rushes towards St. Helena. 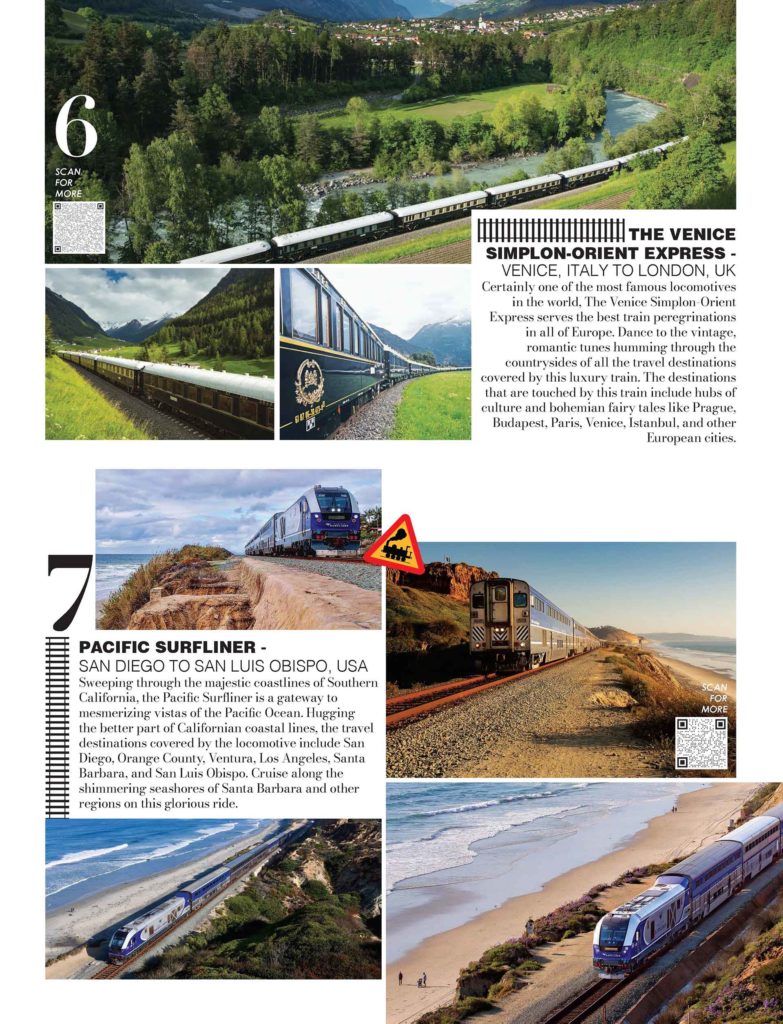 The Venice Simplon-Orient Express – Venice, Italy to London, UK
Certainly one of the most famous locomotives in the world, The Venice Simplon-Orient Express serves the best train peregrinations in all of Europe. Dance to the vintage, romantic tunes humming through the countrysides of all the travel destinations covered by this luxury train. The destinations that are touched by this train include hubs of culture and bohemian fairy tales like Prague, Budapest, Paris, Venice, Istanbul, and other European cities.

Pacific Surfliner – San Diego to San Luis Obispo, USA
Sweeping through the majestic coastlines of Southern California, the Pacific Surfliner is a gateway to mesmerizing vistas of the Pacific Ocean. Hugging the better part of Californian coastal lines, the travel destinations covered by the locomotive include San Diego, Orange County, Ventura, Los Angeles, Santa Barbara, and San Luis Obispo. Cruise along the shimmering seashores of Santa Barbara and other regions on this glorious ride.