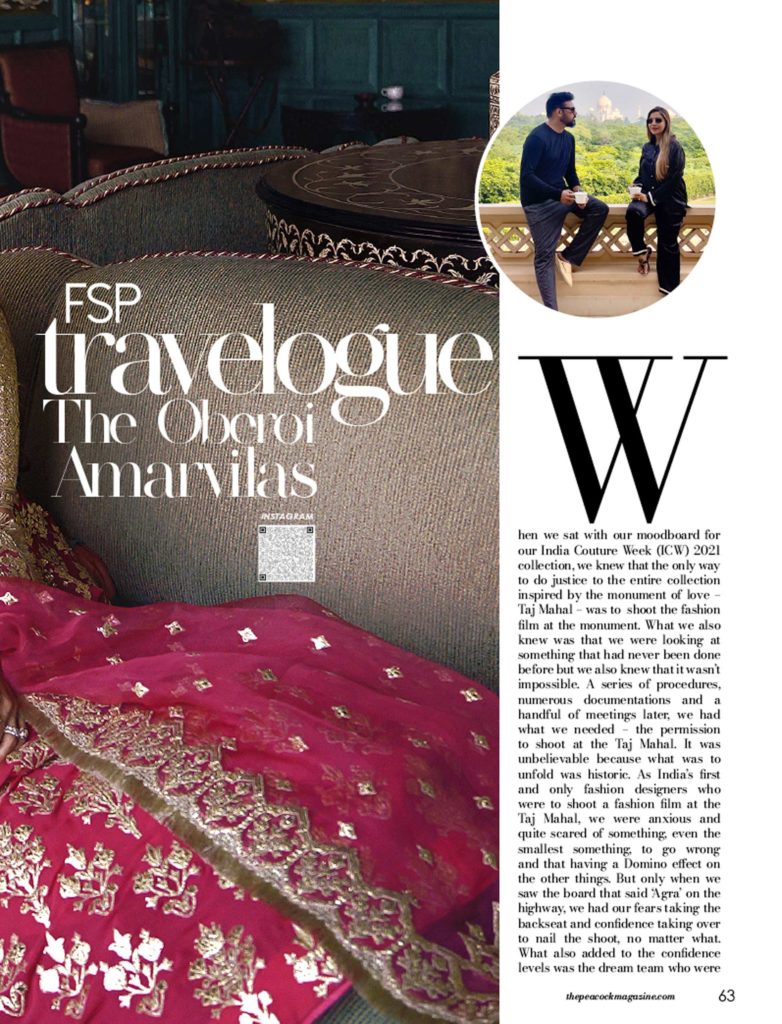 When we sat with our moodboard for our India Couture Week (ICW) 2021 collection, we knew that the only way to do justice to the entire collection inspired by the monument of love — Taj Mahal — was to  shoot the fashion film at the monument. What we also knew was that we were looking at something that had never been done before but we also knew that it wasn’t impossible. A series of procedures, numerous documentations and a handful of meetings later, we had what we needed — the permission to shoot at the Taj Mahal. It was unbelievable because what was to unfold was historic. As India’s first and only fashion designers who were to shoot a fashion film at the Taj Mahal, we were anxious and quite scared of something, even the smallest something, to go wrong and that having a Domino effect on the other things. But only when we saw the board that said ‘Agra’ on the highway, we had our fears taking the backseat and confidence taking over to nail the shoot, no matter what. What also added to the confidence levels was the dream team who were all set to put an iconic show together.

As we neared our property for our three-day stay in the city, we were welcomed by the locals who wore a warm smile and lines and lines of the famous ‘Panchhi Petha’ shops that served the world-famous ‘Agre ka Petha’! We entered the gates of the royal, palatial property of the Oberoi Amarvilas. The dark of the dusk hour was contrasted by the brightly lit corridors, fountains and every nook and corner of the magical facade. We were floored by the beauty of the nine-acre wide property that houses grand gardens, an elaborate terraced lawn, lush fountains and a majestic pool like no other. We started exploring the hotel even before we could reach our rooms and settle in. Our quick hotel tour ended with a warm welcome extended by the staff who not only showed us around the interiors of the hotel but also escorted us to our rooms. While the exteriors of the hotel give a traditional palace-like vibe, the interiors are all about luxury. Taking inspiration from the refined aesthetics of the Mughal era, the local craftsmen have lent their finest skills in intricately carving the inlay work, the jaali (screens), embroideries and wood carvings. The hotel is a rich tribute to the legacy of Moorish and Mughal architecture and the poetic monument, Taj Mahal. 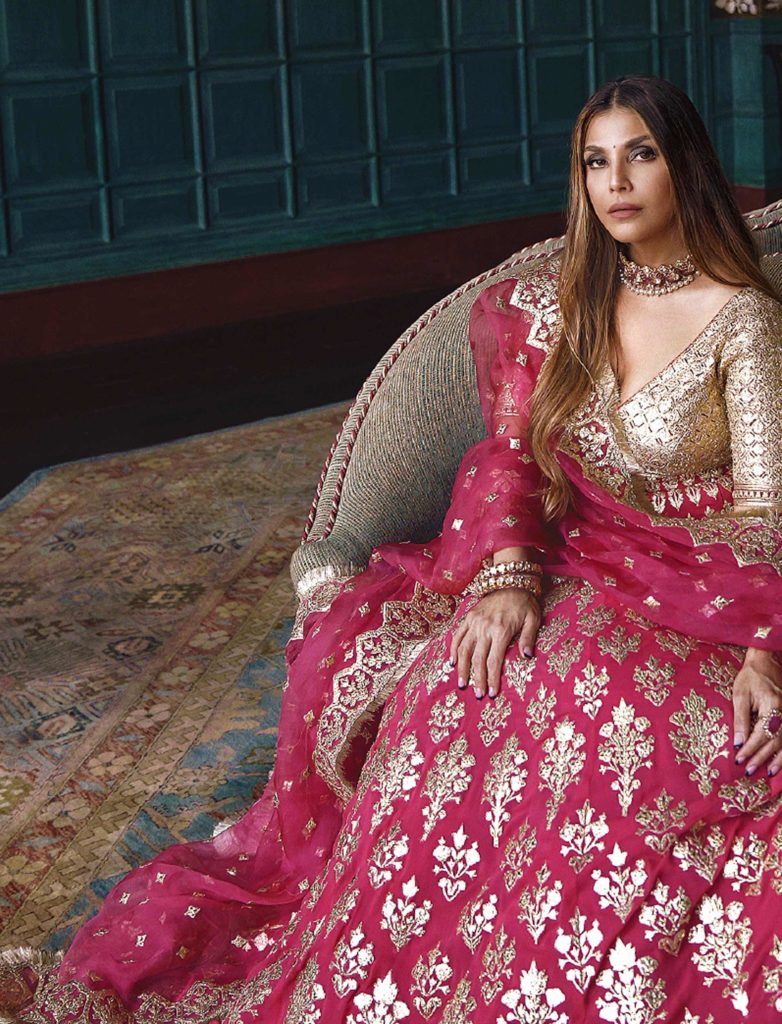 On entering the room, what caught our view immediately was India’s one and only wonder of the world — the Taj Mahal. We walked straight into our suites’ balcony that overlooked the elaborate garden terrace and then the dome of Taj Mahal. Our evening was made! We settled down into our suites and then headed to Bellevue — one of Oberoi Amarvilas’ premium restaurants that serves delectable continental and Mediterranean cuisine. As vegans, we didn’t have to worry much, because the server gave us a variety of options to dig in and eat our hearts out. A stroll by the pool in the great of our team was how we ended the day. 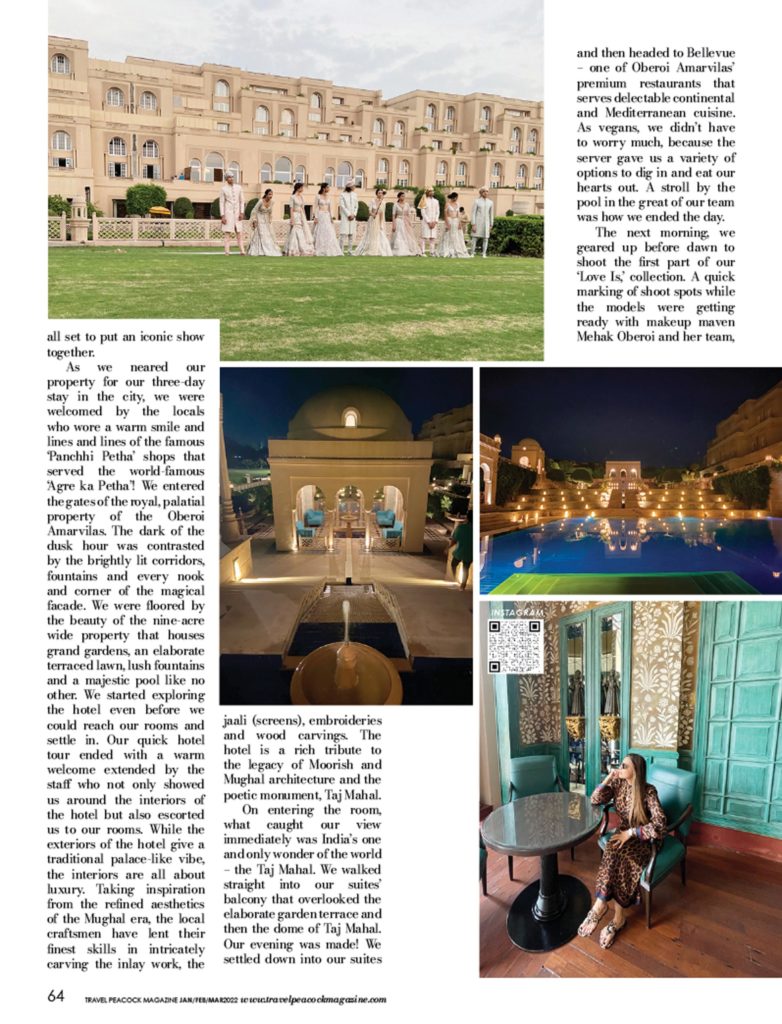 The next morning, we geared up before dawn to shoot the first part of our ‘Love Is,’ collection. A quick marking of shoot spots while the models were getting ready with makeup maven Mehak Oberoi and her team, and we were off to shoot some of the best shots by ace lensmen Errikos Andreou and Nirvair Rai and team that you can now find on our brand’s official Instagram page. India’s leading celebrity stylist Mohit Rai and choreographer Vahbiz Mehta ensured that the level of perfection was maintained right from the first outfit to the last one before the sun set. We wrapped up the long shoot day and headed back to our suites where we enjoyed some us time on the balcony with our green tea. There is nothing like sipping your favorite cuppa with a view to-die-for. What was now needed was a hearty dinner before we called it a day. This time round, we skipped our regular salads and experimented with the vegan pizza. The first bite of the pizza was enough for our hearts to melt and dig in. Even before we could finish the first one, we ordered a couple of more for ourselves and the team. That evening, we walked by the fountains at the entrance and soaked in the peaceful silence that engulfed the night. 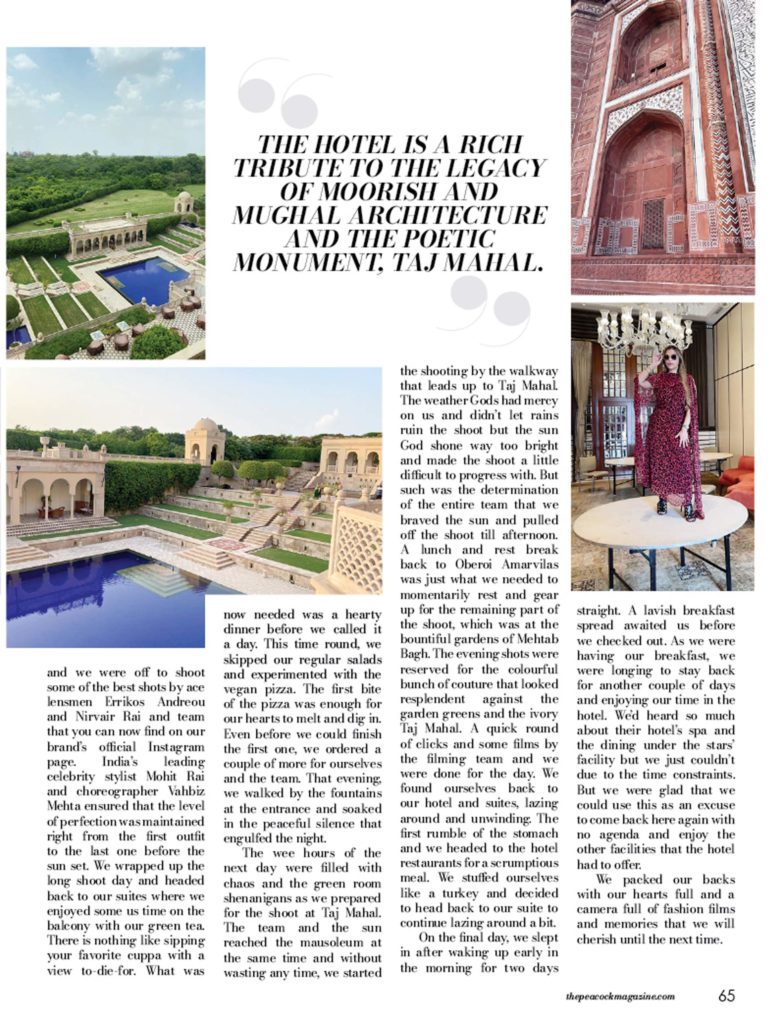 The wee hours of the next day were filled with chaos and the green room shenanigans as we prepared for the shoot at Taj Mahal. The team and the sun reached the mausoleum at the same time and without wasting any time, we started the shooting by the walkway that leads up to Taj Mahal. The weather Gods had mercy on us and didn’t let rains ruin the shoot but the sun God shone way too bright and made the shoot a little difficult to progress with. But such was the determination of the entire team that we braved the sun and pulled off the shoot till afternoon. A lunch and rest break back to Oberoi Amarvilas was just what we needed to momentarily rest and gear up for the remaining part of the shoot, which was at the bountiful gardens of Mehtab Bagh. The evening shots were reserved for the colourful bunch of couture that looked resplendent against the garden greens and the ivory Taj Mahal. A quick round of clicks and some films by the filming team and we were done for the day. We found ourselves back to our hotel and suites, lazing around and unwinding. The first rumble of the stomach and we headed to the hotel restaurants for a scrumptious meal. We stuffed ourselves like a turkey and decided to head back to our suite to continue lazing around a bit.

On the final day, we slept in after waking up early in the morning for two days straight. A lavish breakfast spread awaited us before we checked out. As we were having our breakfast, we were longing to stay back for another couple of days and enjoying our time in the hotel. We’d heard so much about their hotel’s spa and the dining under the stars’ facility but we just couldn’t due to the time constraints. But we were glad that we could use this as an excuse to come back here again with no agenda and enjoy the other facilities that the hotel had to offer.

We packed our backs with our hearts full and a camera full of fashion films and memories that we will cherish until the next time.