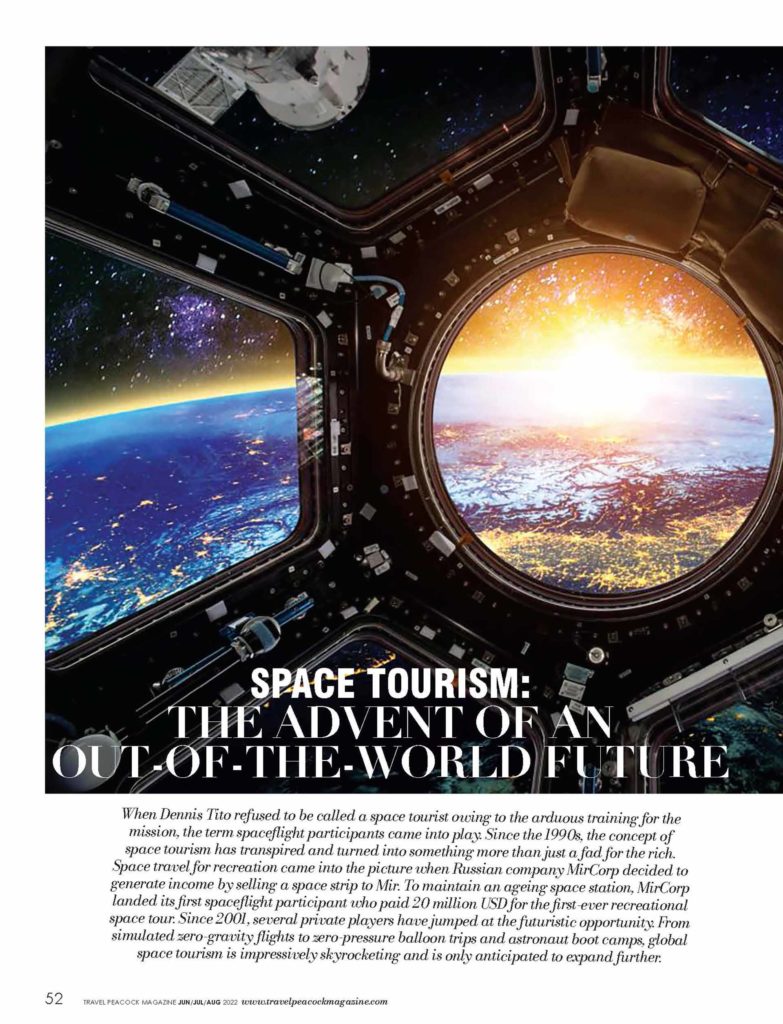 When Dennis Tito refused to be called a space tourist owing to the arduous training for the mission, the term spaceflight participants came into play. Since the 1990s, the concept of space tourism has transpired and turned into something more than just a fad for the rich. Space travel for recreation came into the picture when Russian company MirCorp decided to generate income by selling a space strip to Mir. To maintain an ageing space station, MirCorp landed its first spaceflight participant who paid 20 million USD for the first-ever recreational space tour. Since 2001, several private players have jumped at the futuristic opportunity. From simulated zero-gravity flights to zero-pressure balloon trips and astronaut boot camps, global space tourism is impressively skyrocketing and is only anticipated to expand further. 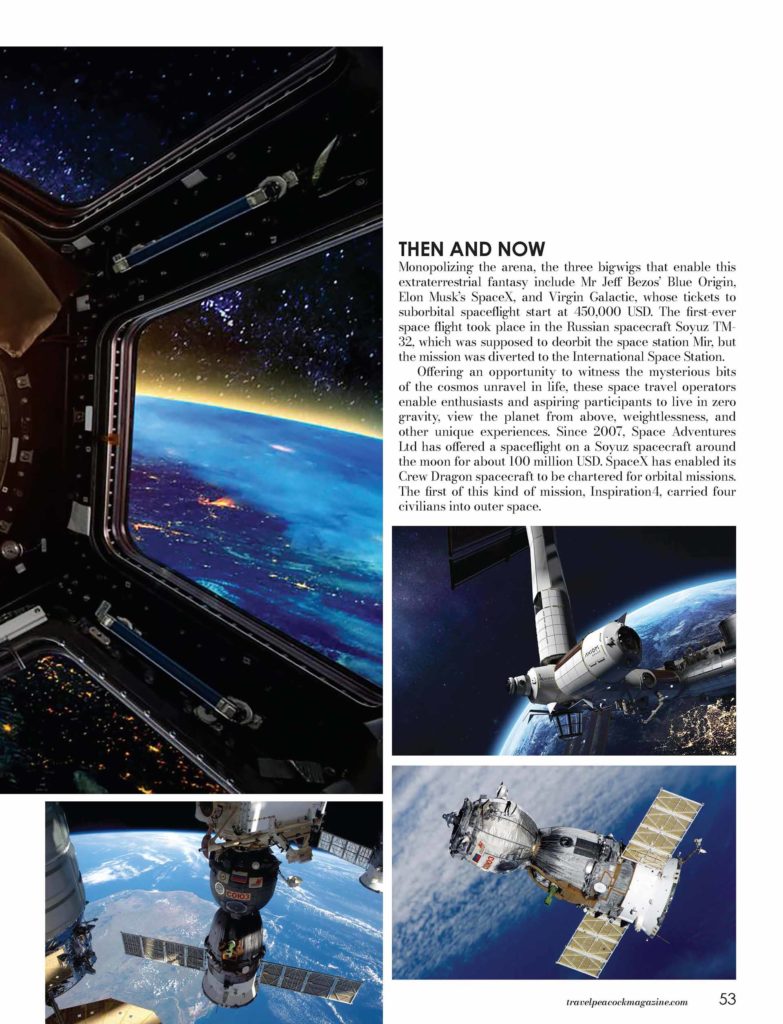 Then And Now
Monopolizing the arena, the three bigwigs that enable this extraterrestrial fantasy include Mr Jeff Bezos’ Blue Origin, Elon Musk’s SpaceX, and Virgin Galactic, whose tickets to suborbital spaceflight start at 450,000 USD. The first-ever space flight took place in the Russian spacecraft Soyuz TM-32, which was supposed to deorbit the space station Mir, but the mission was diverted to the International Space Station.

Offering an opportunity to witness the mysterious bits of the cosmos unravel in life, these space travel operators enable enthusiasts and aspiring participants to live in zero gravity, view the planet from above, weightlessness, and other unique experiences. Since 2007, Space Adventures Ltd has offered a spaceflight on a Soyuz spacecraft around the moon for about 100 million USD. SpaceX has enabled its Crew Dragon spacecraft to be chartered for orbital missions. The first of this kind of mission, Inspiration4, carried four civilians into outer space.

This Future Flourishes At A Price
It is hard to recognize the irony of finding other habitable planets and colonizing space while failing to ensure sustainability on Earth. As it is known, space expeditions result in the generation of massive carbon footprints. For example, the stratospheric balloon rides operated by WorldView are filled with helium, which is a limited resource. Hence, as the space industry makes rapid headway and accomplishes new heights, literally, every day, it is certain that it will be achieved at pricier risk.

Although, currently, the market of this industry is ultra-niche. The advantage could factor in while attempting to mitigate the impacts on the environment. 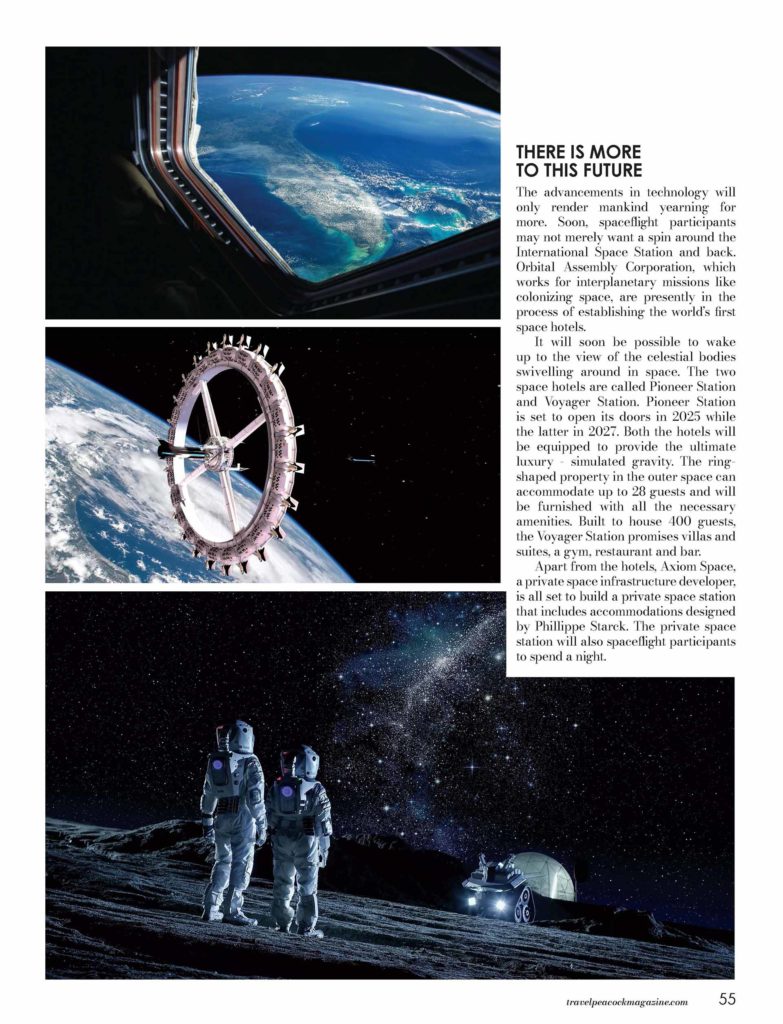 There Is More To This Future
The advancements in technology will only render mankind yearning for more. Soon, spaceflight participants may not merely want a spin around the International Space Station and back. Orbital Assembly Corporation, which works for interplanetary missions like colonizing space, are presently in the process of establishing the world’s first space hotels.

It will soon be possible to wake up to the view of the celestial bodies swivelling around in space. The two space hotels are called Pioneer Station and Voyager Station. Pioneer Station is set to open its doors in 2025 while the latter in 2027. Both the hotels will be equipped to provide the ultimate luxury – simulated gravity. The ring-shaped property in the outer space can accommodate up to 28 guests and will be furnished with all the necessary amenities. Built to house 400 guests, the Voyager Station promises villas and suites, a gym, restaurant and bar.
Apart from the hotels, Axiom Space, a private space infrastructure developer, is all set to build a private space station that includes accommodations designed by Phillippe Starck. The private space station will also spaceflight participants to spend a night.