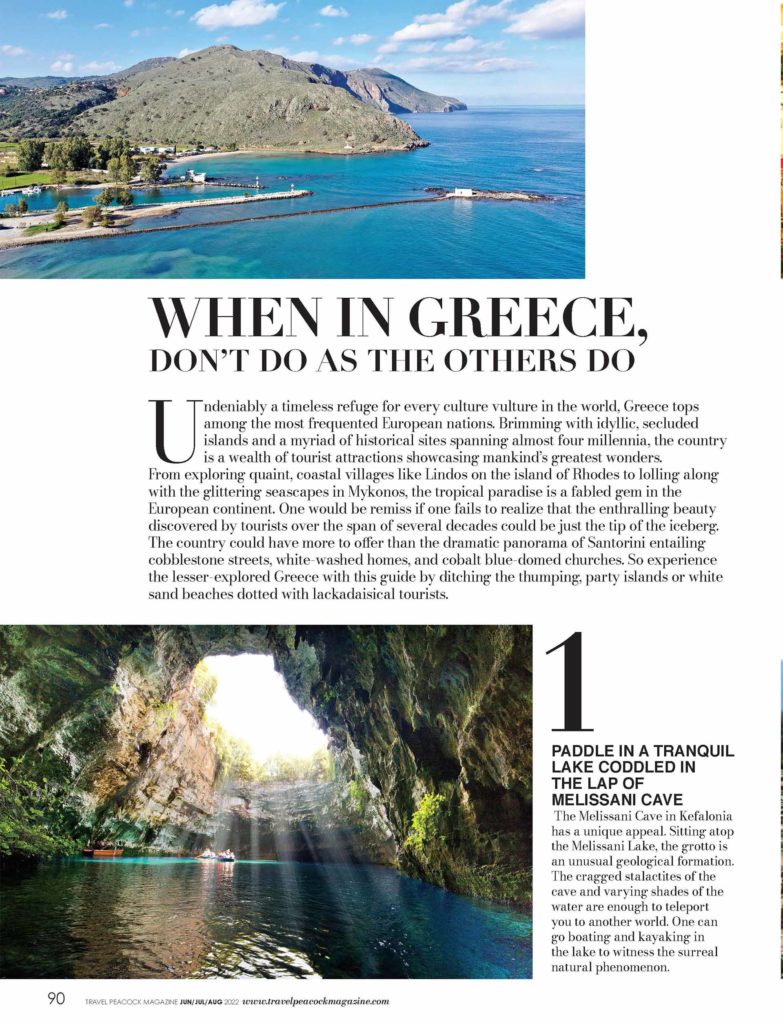 Undeniably a timeless refuge for every culture vulture in the world, Greece tops among the most frequented European nations. Brimming with idyllic, secluded islands and a myriad of historical sites spanning almost four millennia, the country is a wealth of tourist attractions showcasing mankind’s greatest wonders.
From exploring quaint, coastal villages like Lindos on the island of Rhodes to lolling along with the glittering seascapes in Mykonos, the tropical paradise is a fabled gem in the European continent. One would be remiss if one fails to realize that the enthralling beauty discovered by tourists over the span of several decades could be just the tip of the iceberg. The country could have more to offer than the dramatic panorama of Santorini entailing cobblestone streets, white-washed homes, and cobalt blue-domed churches. So experience the lesser-explored Greece with this guide by ditching the thumping, party islands or white sand beaches dotted with lackadaisical tourists.

1. PADDLE IN A TRANQUIL LAKE CODDLED IN THE LAP OF MELISSANI CAVE
The Melissani Cave in Kefalonia has a unique appeal. Sitting atop the Melissani Lake, the grotto is an unusual geological formation. The cragged stalactites of the cave and varying shades of the water are enough to teleport you to another world. One can go boating and kayaking in the lake to witness the surreal natural phenomenon. 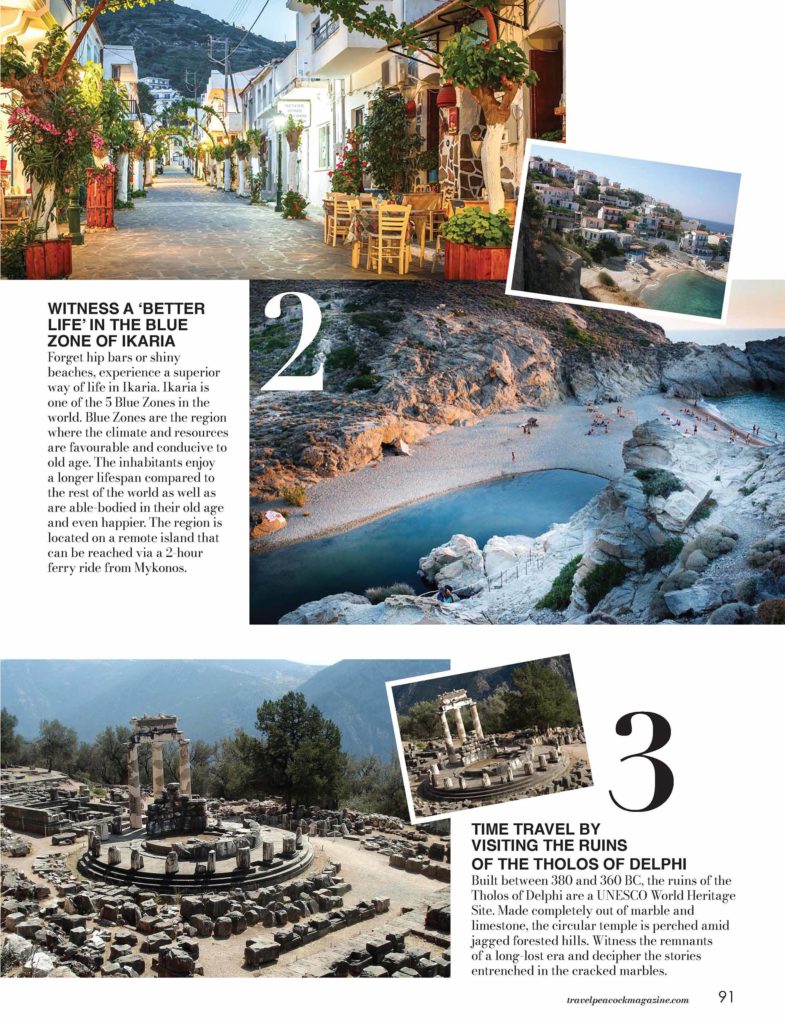 2. WITNESS A ‘BETTER LIFE’ IN THE BLUE ZONE OF IKARIA
Forget hip bars or shiny beaches, experience a superior way of life in Ikaria. Ikaria is one of the 5 Blue Zones in the world. Blue Zones are the region where the climate and resources are favourable and conducive to old age. The inhabitants enjoy a longer lifespan compared to the rest of the world as well as are able-bodied in their old age and even happier. The region is located on a remote island that can be reached via a 2-hour ferry ride from Mykonos. 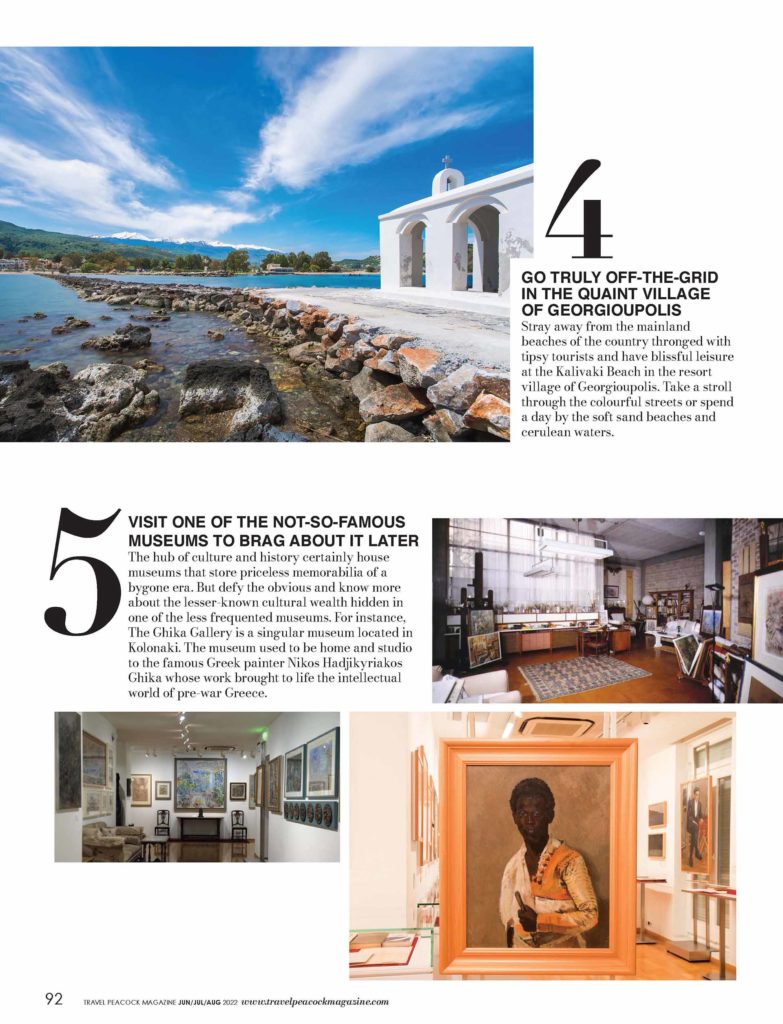 4. GO TRULY OFF-THE-GRID IN THE QUAINT VILLAGE OF GEORGIOUPOLIS
Stray away from the mainland beaches of the country thronged with tipsy tourists and have blissful leisure at the Kalivaki Beach in the resort village of Georgioupolis. Take a stroll through the colourful streets or spend a day by the soft sand beaches and cerulean waters.

5. VISIT ONE OF THE NOT-SO-FAMOUS MUSEUMS TO BRAG ABOUT IT LATER
The hub of culture and history certainly house museums that store priceless memorabilia of a bygone era. But defy the obvious and know more about the lesser-known cultural wealth hidden in one of the less frequented museums. For instance, The Ghika Gallery is a singular museum located in Kolonaki. The museum used to be home and studio to the famous Greek painter Nikos Hadjikyriakos Ghika whose work brought to life the intellectual world of pre-war Greece. 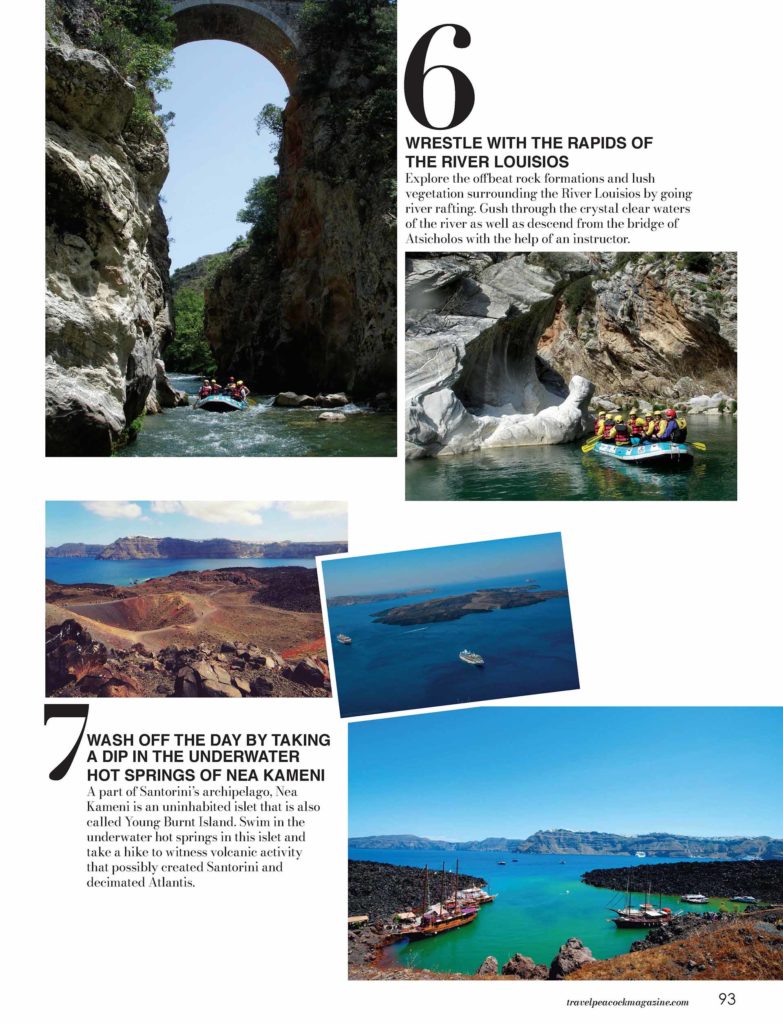 6. WRESTLE WITH THE RAPIDS OF THE RIVER LOUISIOS
Explore the offbeat rock formations and lush vegetation surrounding the River Louisios by going river rafting. Gush through the crystal clear waters of the river as well as descend from the bridge of Atsicholos with the help of an instructor.

7. WASH OFF THE DAY BY TAKING A DIP IN THE UNDERWATER HOT SPRINGS OF NEA KAMENI
A part of Santorini’s archipelago, Nea Kameni is an uninhabited islet that is also called Young Burnt Island. Swim in the underwater hot springs in this islet and take a hike to witness volcanic activity that possibly created Santorini and decimated Atlantis.