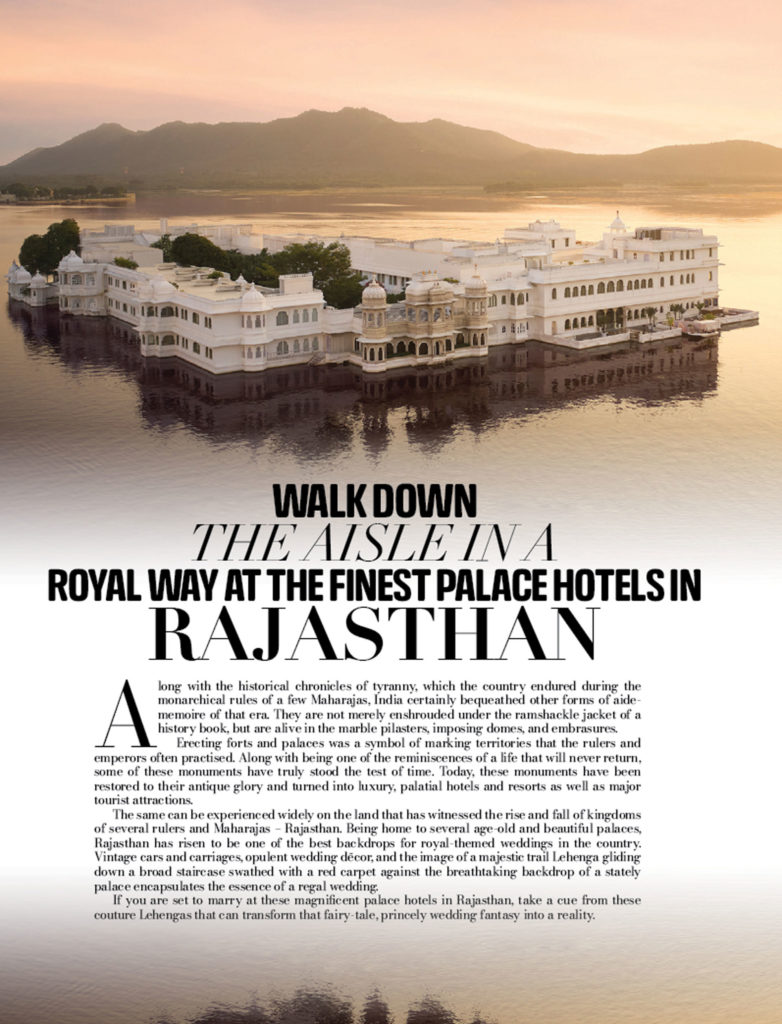 Along with the historical chronicles of tyranny, which the country endured during the monarchical rules of a few Maharajas, India certainly bequeathed other forms of aide-memoire of that era. They are not merely enshrouded under the ramshackle jacket of a history book, but are alive in the marble pilasters, imposing domes, and embrasures.
Erecting forts and palaces was a symbol of marking territories that the rulers and emperors often practised. Along with being one of the reminiscences of a life that will never return, some of these monuments have truly stood the test of time. Today, these monuments have been restored to their antique glory and turned into luxury, palatial hotels and resorts as well as major tourist attractions.
The same can be experienced widely on the land that has witnessed the rise and fall of kingdoms of several rulers and Maharajas — Rajasthan. Being home to several age-old and beautiful palaces, Rajasthan has risen to be one of the best backdrops for royal-themed weddings in the country. Vintage cars and carriages, opulent wedding décor, and the image of a majestic trail Lehenga gliding down a broad staircase swathed with a red carpet against the breathtaking backdrop of a stately palace encapsulates the essence of a regal wedding.
If you are set to marry at these magnificent palace hotels in Rajasthan, take a cue from these couture Lehengas that can transform that fairy-tale, princely wedding fantasy into a reality. 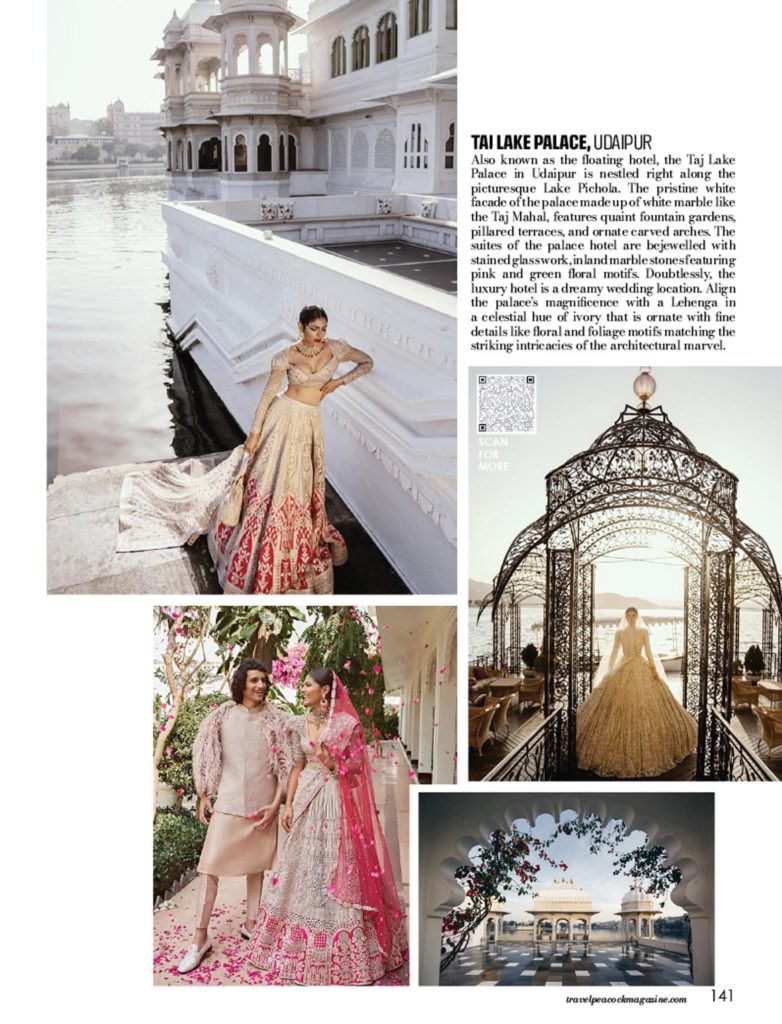 1. Taj Lake Palace, Udaipur
Also known as the floating hotel, the Taj Lake Palace in Udaipur is nestled right along the picturesque Lake Pichola. The pristine white facade of the palace made up of white marble like the Taj Mahal, features quaint fountain gardens, pillared terraces, and ornate carved arches. The suites of the palace hotel are bejewelled with stained glass work, inland marble stones featuring pink and green floral motifs. Doubtlessly, the luxury hotel is a dreamy wedding location. Align the palace’s magnificence with a Lehenga in a celestial hue of ivory that is ornate with fine details like floral and foliage motifs matching the striking intricacies of the architectural marvel. 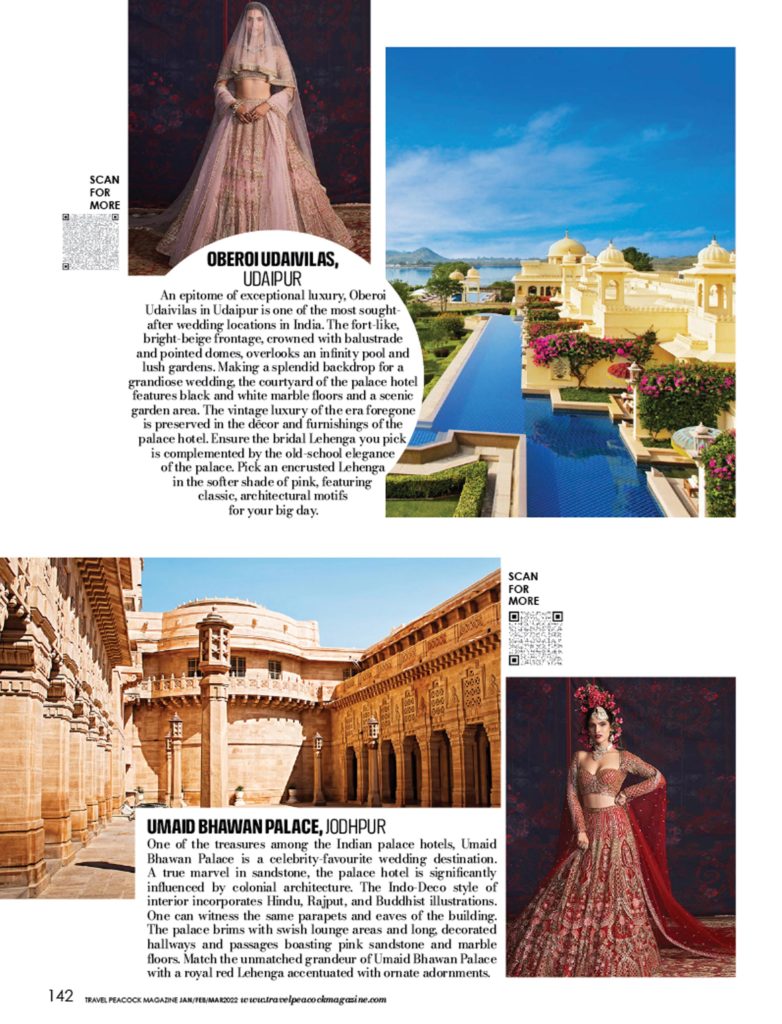 2. Umaid Bhawan Palace, Jodhpur
One of the treasures among the Indian palace hotels, Umaid Bhawan Palace is a celebrity-favourite wedding destination. A true marvel in sandstone, the palace hotel is significantly influenced by colonial architecture. The Indo-Deco style of interior incorporates Hindu, Rajput, and Buddhist illustrations. One can witness the same parapets and eaves of the building. The palace brims with swish lounge areas and long, decorated hallways and passages boasting pink sandstone and marble floors. Match the unmatched grandeur of Umaid Bhawan Palace with a royal red Lehenga accentuated with ornate adornments.

3. Oberoi Udaivilas, Udaipur
An epitome of exceptional luxury, Oberoi Udaivilas in Udaipur is one of the most sought-after wedding locations in India. The fort-like, bright-beige frontage, crowned with balustrade and pointed domes, overlooks an infinity pool and lush gardens. Making a splendid backdrop for a grandiose wedding, the courtyard of the palace hotel features black and white marble floors and a scenic garden area. The vintage luxury of the era foregone is preserved in the décor and furnishings of the palace hotel. Ensure the bridal Lehenga you pick is complemented by the old-school elegance of the palace. Pick an encrusted Lehenga in the softer shade of pink, featuring classic, architectural motifs for your big day. 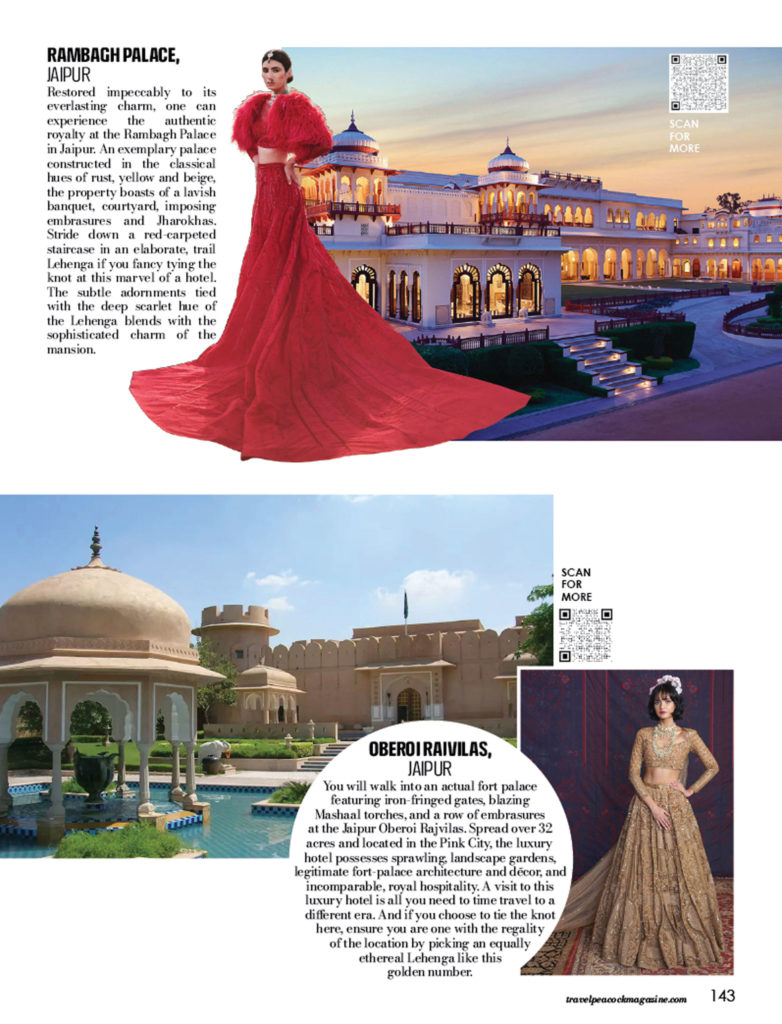 4. Rambagh Palace, Jaipur
Restored impeccably to its everlasting charm, one can experience the authentic royalty at the Rambagh Palace in Jaipur. An exemplary palace constructed in the classical hues of rust, yellow and beige, the property boasts of a lavish banquet, courtyard, imposing embrasures and Jharokhas. Stride down a red-carpeted staircase in an elaborate, trail Lehenga if you fancy tying the knot at this marvel of a hotel. The subtle adornments tied with the deep scarlet hue of the Lehenga blends with the sophisticated charm of the mansion.

5. Oberoi Rajvilas, Jaipur
You will walk into an actual fort palace featuring iron-fringed gates, blazing Mashaal torches, and a row of embrasures at the Jaipur Oberoi Rajvilas. Spread over 32 acres and located in the Pink City, the luxury hotel possesses sprawling, landscape gardens, legitimate fort-palace architecture and décor, and incomparable, royal hospitality. A visit to this luxury hotel is all you need to time travel to a different era. And if you choose to tie the knot here, ensure you are one with the regality of the location by picking an equally ethereal Lehenga like this golden number.

LUXURIATE ROYALLY AT THESE PALATIAL STAYS IN INDIA